The Unexpected Residency of Doctor Macaroni

We definitely weren’t looking. Three girly cats in the house was plenty of pets for us. As sad story after sad story of abandoned cats, lost dogs and dead or incapacitated caregivers swamped my Facebook feed, I would turn to Seen and say “I really want to help them.” And most days we would talk seriously about bringing a less fortunate animal to our home, but it always ended with one of us saying “It wouldn’t be right to upset the girls.” We took turns playing that role, the role of the reasoned response.

So we absolutely were. not. looking. to add another cat to the Robinson Roster of players. It just so happened that we were out of treats, low on dry food and had to go to the pet store.

As Seen pulled the car out of the Rite-Aid parking lot I asked “Should we go to The Wharf or to Petco?” The drugstore was smack dab in between those locations. The exit lane was right turn only, the choice was made for us. Off to Petco we went.

It was a Thursday afternoon, so the local rescue wasn’t even onsite with cage after cage of adorable kitten, tempting us to come play, tempting the donations from my wallet. We were in a hurry, Seen had to get back to work to fix an image or website or something-or-other. My deadline was a week away, so the pressure on me was lighter.

The checkout line was three people deep. Seen held the bag of food, I juggled the treat bags and turned my head to the front corner of the store. Away from the windows, next to a bin of “Live FOOD!” crickets, was a four section cabinet, clear plastic covered the front. It was meant to showcase cats from the local shelter. I’d seen it before, tucked away from traffic. I assumed nobody was inside, but I thought I should maybe, kinda, sorta just go check and see if I could spot a kitten or somebody who needed a minute or two of attention.

He was curled under a short shelf, on a thinning felt circle of fabric.

“Hello there…” I wiggled my finger through one of the air holes cut into the plastic barrier between us. He moved his mouth, no sound came out. He started to stand, but his toenails were too long and got snagged in his bed. Puh-thetic. I called Seen over so we could both have our hearts broken by the little guy.

Then friendly sales associate, Sara, came up behind me. “Would you like to hold Casper?”Casper, a 4 year old, lanky, butterscotch-y ginger cat. Named Casper. The name was wrong. He weighed 18 lbs (which was even more apparent once I picked him up. He’s a fatty, not a lanky.) His litter box was overflowing. He bit me lightly when I held him and he had been in that 3′ x 5′ box for four months. He was an owner surrender, with no history, so who knew what kind of behavioral problems got him into the pokey. He had a lot of cards stacked against him.

Still holding him, I looked over at Seen. “Should we take him home?” I said, knowing he would dissuade me, be the voice of reason this time when I was the soft-hearted fool for even thinking it.

Seen took him from me and Casper decided to start purring. “Yep”

Well, apparently the manager had just transferred into that store and didn’t know how to adopt out the cat. He called a number for the rescue that he had on a slip of paper, Annie didn’t answer. I called Annie, she didn’t answer. He said “I’ll call you when she calls back.” So we left, reluctantly, both of us kind of concerned that reason would creep in before we came back to get ‘Casper’. I called the Animal Control number, because he was their ward. I wanted to talk to somebody. Annie might be on vacation for all we knew.

After 20 minutes on hold, Mary finally got on the line. Annie was just the volunteer who did transport, she had no authority over Casper. According to Mary, all we had to do was fill out the paperwork, pay cash for the cat and we could take him that day. (This gave me pause that it’s so easy to get an animal, no landlord or personal reference? Shelters are much different than the rescues where we’ve spent time in the past.)

Petco shift change had happened, so when I called them to tell them we were coming back, Melissa answered and told me that Casper was “grumpy” and we could get our money back if we didn’t like him. There was no way I was leaving him there now. Who wouldn’t be grumpy living in a tiny box for 4 months, with weird ladies poking through the plastic at you?

The home office now all set to accommodate our new charge, we went back to Petco, with a carrier. And Casper came home.

Casper tried on a bunch of new names over the next 48 hours: Mongo, Brock Sampson, Gohira, Four, Hamster, Twain Boneraper, Hellboy, Archer. (You can get a nice peek into the maturity level of the Robinsons from that name collection.)

Then Seen hit on Dr. Marconi. He’s a character in a book (and movie) we both love called John Dies at the End. He’s a psychic demon fighter. We figured the artist formerly known as Casper had summoned me to that dark corner with his mind, so a psychic demon fighter was appropriate. But Dr. Marconi quickly became Dr. Macaroni, which delighted both of us because a.) it sounds like a 4 year old named him and b.) there are so many nicknames we can use now, and we do.

Two of the resident girly cats aren’t super excited by this latest addition. Ling Ling has been hissing at the office door where Doc Mac is staying and KoE just hisses when he comes out for his supervised visit time and he tries to sniff her. But they haven’t been showing too much trauma otherwise, food still eaten, snuggles still given, poop still droppin’. Olivia is just following him around, trying to get him to play with her.

So our big Mac is here to stay. He isn’t grumpy, as Mary the Manager insisted, he’s very respectful of the drama queens, backing off when they hiss, watching them play and/or eat without messing with them. We won’t be returning him. Doctor Macaroni is in Residence at the Robinson Ranch for good. 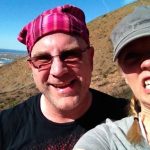