Resolution number Six for 2011 is to update this blog at least once a week. As this is the first week of 2011, I am off to a stellar start. So, let’s update shall we?

1. I want this. A notepad. For the shower!! This brilliant device will do one of two things: Either I will write down all of the genius ideas that bombard me in the shower, or it will scare the muse out of the shower and I can actually wash with a calm, peaceful mind. Click on the pic to find out where you can buy it for me.

2. I decided to make some catnip toys

for the kitties at the shelter. Since the sewing machine is broken, I hand sewed little pockets and filled them with batting and nip. To entertain my brain, whilst my fingers were stitching, I watched Boardwalk Empire on demand. I got sucked into the really great writing, unpredictable characters and inside jokes about history. Plus, I stage managed some theatre with Micheal Shannon a few years ago, so it’s

always fun to see him working.

SPOILER ALERT – (Ok, not really a SPOILER but more of a frowny emoticon) The last episode of Season 1 was lousy. I got totally hooked on the first 11 and then, ppllbbt. It seemed so contrived. At one point, during Michael Shannon’s last scene of the season, I felt like I was watching an episode of Three’s Company. Not sure why the writers/producers made those choices, other than JUST to keep a successful cast.

3. Joined a writing group. I knew 2 people going in, but had weird random historical connections to the other 3. Connections I didn’t know about until the meeting. Sussing out those connections led to me rambling. I have two social modes, shy/terrified or rambling. In the moment, rambling always feels like a triumph over my timidity. Later, say, in the shower when I have monkey mind, I wonder why I say dorky things and get embarrassed. Aside from my neurotic reactions to being social, I am really looking forward to the group. It’s giving me deadlines to get seriously serious and finish draft 2 of my NaNoRhino novel.

And now, as the rambling for this week comes go a close, I wish you a very warm and happy 2011. (Check out more resolutions and top picks for movies/books/TV/music for 2010 on Fierce and Nerdy.) Keep your feet on the ground and keep reaching for the paper towels on the top shelf. 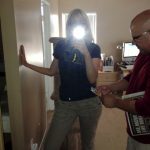